I woke up at 4:30 am because I forgot to turn off yesterday’s alarm.  I went back to bed and tried to sleep.  Finally, at 4:45 am, I got up to go shower.  I noticed again in this home that there is no hook to hang neither a towel nor a robe; no shelf to place toiletries, and there are no shower curtain and rod.  In this particular convent, next to the room I occupy the amenities are built in three different stalls: one for the sink, one for the toilet, one for the shower.  This facility has no running water.  We have to use a bucket filled with water and a small bowl.  I had to use the lantern in the stalls.   I feel so blessed that at home I have the luxury of these comforts — a switch for electricity to be turned on/off at our will and pleasure; running water in the faucets with hot or cold according to our choice; a hook to hang towels; a rug to stand on while drying oneself; etc… the things we take for granted.

We went to prayer at 5:45 am followed by breakfast.  We had pineapple and spaghetti, Corossol juice, and coffee.  Helped wash the dishes and put them away.  I went in the yard and picked up from the ground the mangoes that had fallen during the night.  The sisters gather them in a wheelbarrow for the kids to take on their way home after dismissal.  I watched Sr. Francoise teach a catechism classes to the fourth graders.  The children first practiced some songs for the liturgy, and then she discussed the creed and sins. 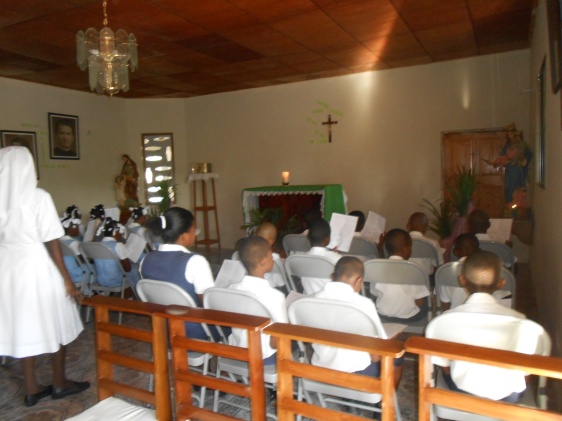 Buteau called to have an informal interview with me for the Haitian Apostolate internet radio Solidarite .  I recounted some of the events in the first few days of my trip and the coincidental visit of President Michel Martelly to Anse-a-Veau as we came in too.  There is only one main entrance into town. I also mentioned several emails and contact information I had sent of people I had met.  He would need to follow up with them for possible interviews.

I worked with Sr. Charitable, typing tests for the end of the 3rd semester on the laptop I had brought for her.  I used the Natcom jump to have access to the Internet.  I thanked the PTFS for my stay with them and copied Buteau so he could follow up with them for possible interviews about their projects.

Mrs. Leblanc mentioned how she is planting flowers and bushes along the road.  She is so proud of the work sponsored by CORA for the TiSese market place where the street vendors are able to sell their merchandise in clean surroundings. 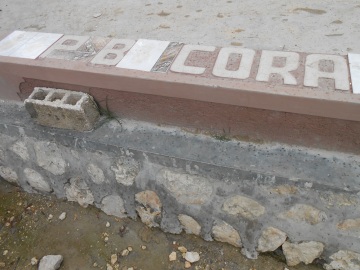 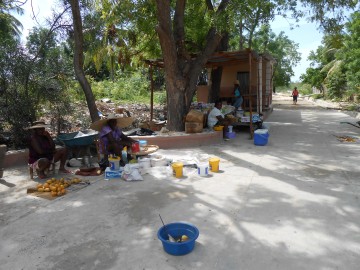 While walking some kids on the street will call me “blan sa w pote pou mwen?” (White woman, what do you have for me?” I know they realize I am not a local.  I say to them,  “Why do you call me that?  Don’t you see that I am Haitian like you?”  They look at me funny.

Two boys were walking on the road by the cemetery ahead of me.  One boy picked up a rock and said to the other “your name is written on it”.  The other boy asks why he says that.  “I tell you your name is written on it for me to hit you in the head with it to break your skull.”  When I heard that, I said:  “Poukisa ou di sa, sa pa bèl.”  He insisted:  “His name is written on it for that purpose.”  I said: “why don’t you think of something nicer to say or think about.”  He said:  “Maybe I will find a rock that will be made of gold.  Then I would become rich so that I can get a lot of spaghetti to eat for breakfast, and rice and beans for lunch.  Then I will leave this place.”  I did not comment as I had reached the convent. 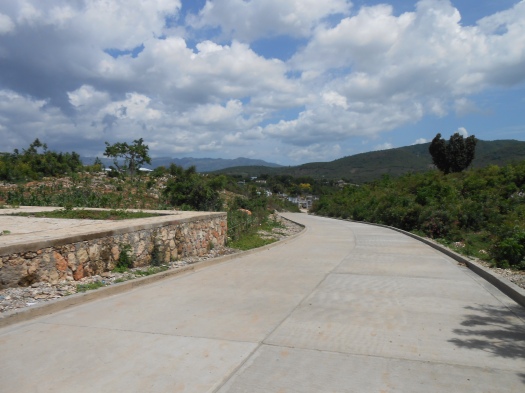 At 5:30 pm we gathered at church to recite the rosary, prayers in honor of Mary, followed by mass.  As soon as we get back we have supper usually a potage or labouyi.

Srs. Charitable, Francoise, Simonique and I worked on completing the budget for the proposal they had submitted to Mr. Labissiere requesting equipments and funds for the school.