Wake up time: 4:30 am.  Suitcase ready, room checked and off I went to the brothers’ house for coffee.  Brothers Lozama and Denis were ready.  I said goodbye to Brothers Wilfrid and Phred.  My suitcase is heavy because of the wine, liquors, and jams I bought.  I will have to give some to friends before I leave for the US.  Not too much traffic from Riviere Froide on the way to Morisseau.  Mostly going on terre batue as road through the mountain.  We visited the first community center Nanbonne with four bed rooms and a large room. The building not finished and right on the roadside.  It has some land no source of water close by.  Sorel Morisseau, Yves Decopin, two other delegates from the region and Fr. Thelemaque welcomed us to facilitate the visits. 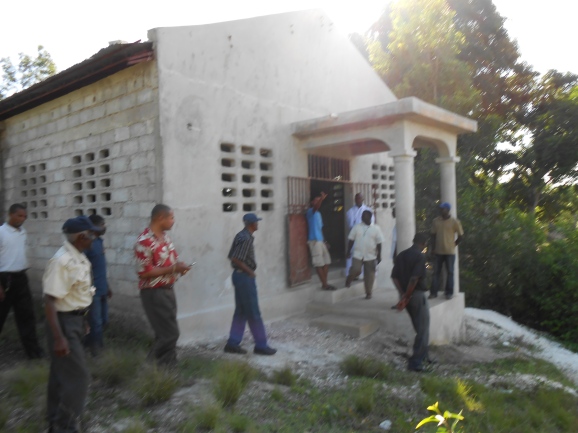 We then went to St. Rose de Lima parish where we had breakfast (fruits, boiled plantains, fish, salad).  The people of the region about a hundred or so who usually celebrates mass at 7:30 waited for us until 9:30 am to welcome us (Brothers Lozama, Denis, Olizard and his visiting friend from St. Lucia, Marie Joe and I). After the liturgy and words of welcome we traveled to the St. Rose de Lima School which has kinder to 7 grade with 150 students.  The tuition is H$80 with no ‘cantine’. Most schools now are not receiving funds nor any help to feed the children. There are lands around but no plan to use them to produce the food to feed the children.

We went to the other site to look at the sale paroissiale.  It has a large conference/stage style room and two very small rooms, no bathrooms, no kitchen.  It has some land around with water from a possible well.  It is a nice interior location.

It is also very close to the National School of Morisseau which has grades 1 to 6 with 15 teachers and 300 students. 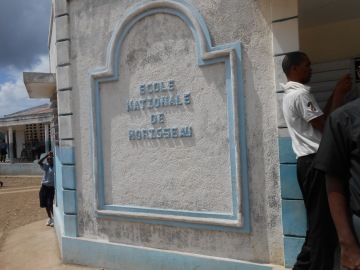 We continued through l’Azile, Marche d’Arnauld to go to Brosard.  There Mrs. Leblanc and Milio showed us the house.  It has about eight rooms, large land and the river running nearby at the edge of the property.  The yard had an old foundation of a broken down house and many fruit trees.  There is a sealed room for the owner.  There is a cracked wall, no bathrooms, no ceiling only the tin roof.  There is no gate.  Br. Olizard took good notes on all the sites we visited to write  his proposals for CORA which has requested the presence of the brothers in the Nippes.

From Brosard, we continued to Anse-a-Veau.  When we reached the entrance of the town by Mrs. Leblanc’s house, President Martelly was coming to town too.  We were stopped until he and his entourage reached the bottom of the Cathedral where his stage was set.  We continued around the main center square to go to the sisters’ house where the brothers dropped me.  We had lunch before they returned home.  Sister Charitable and I went to listen to the president, Sr. Francoise was gardening.  I saw Fr. Ulrick listening to the speech as well.  We were not allowed to go through the steps of the church to go closer to the podium.  I made some pictures at a distance next to Amalia’ s ruins.  After his speech, the president threw some white and pink soccer balls for the school children.

I went back with the sisters to the convent.  We had prayer time before supper.  We talked for about an hour before going to bed.  I have a nice spacious room with a ‘moustiquaire’.  It is interesting to learn about a new religious order.  They follow the spirituality of John Bosco and Marie Dominique Mazzarello (1872).  Their goal is to educate honest and good citizens.