It rained heavily during the night. Some roads were rendered impassable for driving, filled with puddles of water or mud.  While waiting for our ride I saw parents carrying their children in their arms, on their backs to avoid them from getting muddy and dirty their uniforms.  For an older child, I saw the father buy water for 5 gourdes to clean her shoes before she went to class.

Sr. Marcelle was unable to pick us up, she was stuck in traffic.  Some streets were closed due to flooding.  Sr. Martha agreed to drive me.  We had to go through the airport’s main road and get to Nazon, turn left on Lalue.  We could not find the entrance of the street to the school in Troue Sable.  We went around several times then found the parish of Christ Roi.  The priest, Roger Pierre, asked someone from his parish, Jean, to walk us over.  We walked through corridors in between people’s huts on the hill.   Without a guide we would have been completely lost.

When we arrived at the school, Sr. Marie France Paulemon welcomed us.  We visited the new building as well as the temporary classes.
A class made a short singing presentation to welcome me. 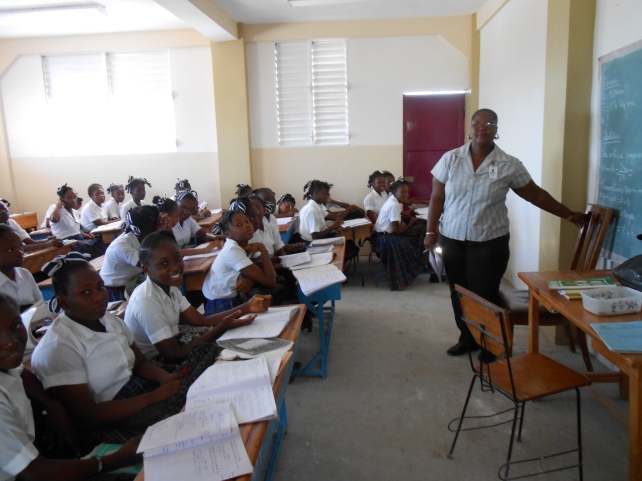 A class in session

There are a total of 16 classes and 60 teachers for 567 students, plus personnel (3 cooks, 1 houseworker, 1 guardian).   I asked Sr. Marie France to prepare a budget and to send a report for money received as suggested by Forgotten Children.  She promised to follow up and send the first draft to Sr. Martha if she needs any help . 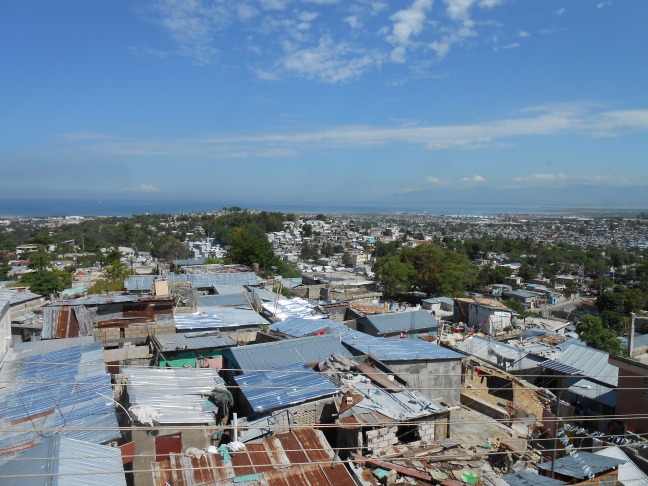 A view from the school

In the afternoon, in Carefour Fleurio, I heard the children singing  “C’est Nous Jeunesse Etudiante”.  I wanted to join them.
Later, I heard the teacher explaining some of the sacrifices the heroes made to get us our independence and how we were under tutelage right now. He said: “Nous avons eut une liberation prematurée…”.  I don’t think I heard anything else after that, I was so incensed. I walked in the front of the class and said, “Good afternoon children.  I beg to differ with your teacher about a premature independence.  This is an affront to the heroes themselves.  The questions we should pose are what had we done with the newfound independence and what we are doing with it right now.   Freedom requires an obligation to be responsible individually and collectively to build a just country for all its citizens which has not happened often in our history because of personal greed and corruption.  Since Dessalines who became self aggrandizing in gaining power as an emperor and was killed, we have had most of our political figures trying to grab the presidency seat for personal gain not the benefit of building the nation.  ‘Ote toi que je m’y mette’ has been the mot d’ordre … giving lengthy speeches-‘pale franse’- to blind the people and doing very little to change the conditions and poor state of the country.  We always want to terminate the term of the person in office.  When a government is removed or disbanded, everything is destroyed – kraze brize – with no sense of continuity for progress. A true leader is one who brings people together around a vision and serves them to implement it for the benefit of all.
The teacher quickly dismissed me by saying: “thank you and have a nice day ”.

I completed some emails, my notes and Skyped home as I was not sure if I would have access to wi-fi.

In the evening, I started to pack.  I had a good time with the Daughters of Charity.  I lived in the postulants‘ house and on that last night I prayed with them and their mentor before going to bed.